Climate change is one of the most pressing problems our world is facing today. It affects everyone – from families worrying about their children’s futures, to pension funds deciding where to invest.  So, it is in the interests of everyone that we see systemic change that averts climate catastrophe and unlocks the potential of green growth.

The most recent and most commonly used term that we hear these days in context of climate change is “Net Zero”.

We’ve all heard the term net zero, but what exactly does it mean? Putting it simply, net zero refers to the balance between the amount of greenhouse gas produced and the amount removed from the atmosphere. We reach net zero when the amount we add is no more than the amount taken away.

The next important question is how can we achieve this and why does it matter?

Before we dive deep into understanding net zero, let’s understand what climate change is, its causes and how we can prevent it.

All having their own versions based on their own experiences. But we believe what the experts say and their words are not different from what common people are saying.

Evidence shows that our planet has been getting hotter. The warmest 20 years on record have been in the last 22 years according to the World Meteorological Organization and the warmest four were all very recent: 2015 to 2018.

Global average temperatures are now 1℃ higher than in the pre-industrial era.

A degree doesn’t sound like a lot, but the reality is that this incremental warming already appears to be having a negative impact. What’s more, if recent trends continue, this is set to worsen, with predictions of global temperatures increasing by as much as 3-5℃ by 2100.

Even with this tiny rise in global temperatures we are feeling the effects of climate change, with erratic weather patterns, including: heatwaves; floods and severe storms; loss of polar ice; and, rising sea levels. This will only get worse if global warming intensifies.

What is causing climate change?

It’s widely recognised by scientists and governments that climate change is being triggered by higher levels of greenhouse gasses in the atmosphere. Their name derives from the greenhouse effect they create by warming the Earth’s surface and the air above it.

This is caused by gasses that trap energy from the sun. The most common greenhouse gasses are water vapor, carbon dioxide (CO2) and methane.

CO2 is the most dangerous and abundant of the greenhouse gasses, which is why cutting carbon emissions, carbon footprints or seeking low-carbon alternatives are suggested as ways to address climate change.

How can we stop climate change?

The excess of greenhouse gasses in the atmosphere is triggering harmful global warming, so reducing the amount of these gasses should help to tackle climate change. This can be done in two ways:

1. lower the emissions we are sending into the atmosphere, from activities such as industrial processes, power generation, transport and intensive agriculture

What does it mean to be net zero?

Net zero means achieving a balance between the greenhouse gasses put into the atmosphere and those taken out.

Reaching net zero applies the same principle, requiring us to balance the amount of greenhouse gasses we emit with the amount we remove. When what we add is no more than what we take away we reach net zero. This state is also referred to as carbon neutral; although zero emissions and zero carbon are slightly different, as they usually mean that no emissions were produced in the first place.

Net zero allows for some emissions to be above zero so long as they are balanced out elsewhere to achieve net zero carbon global emissions. Rather than attempting to reduce the amount of carbon emissions to zero, the net zero emissions target allows some areas to operate with positive rather than negative emissions.

This allows for sectors where it would be difficult to reach net zero emissions, such as aviation, to operate while being offset by other sectors where it is easier to reduce emissions or find alternatives for energy consumption.

What is the Difference Between Zero and Net Zero?

Industry uses the terms ‘Net Zero’ and ‘Zero Energy’ but they are not interchangeable as there is a difference between the two approaches.

This means offsetting the energy used on-site through other means. So, for example, if a project consumes 250,000 kBTU of electricity and 250,000 kBTU of natural gas it would need to produce 500,000 kBTU of on-site renewable energy in order to achieve net zero.

By contrast, the Department of Energy defines zero energy as having to produce as much renewable energy on site as it consumes in source energy. This doesn’t just include the energy that is consumed, but also the energy required to deliver the electricity or natural gas.  This includes factors such as transmission loss and energy by generation efficiency and breaks down each energy source separately. In this instance one unit of electricity does not equal one unit of natural gas as they have differences in sourcing.

Net zero is less complex and easier to achieve than zero energy, since it doesn’t account for differences in fossil fuels, or the energy expended in sourcing and delivery. This also allows some industries to operate with higher fuel consumption so long as these are negated by other industries.

Given the impact that carbon emissions have on our planet, you might wonder why we aren’t aiming for zero, or gross zero, rather than net zero. Gross zero would mean stopping all emissions, which isn’t realistically attainable across all sectors of our lives and industry. Even with best efforts to reduce them, there will still be some emissions.

Net zero looks at emissions overall, allowing for the removal of any unavoidable emissions, such as those from aviation or manufacturing. Removing greenhouse gasses could be via nature, as trees take CO2 from the atmosphere, or through new technology or changing industrial processes.

The UK government has highlighted a number of industrial priorities based upon a wider UK Industrial Strategy. These trending topics don’t just seek to advance UK industry in key areas, but also include initiatives that directly impact on net zero, such as electrification.

Aside from wider government initiatives, Earthr.org also takes necessary initiatives to make people aware about how widely the climate is changing and timely steps can help in resolving them. Join Earthr.org to meet like minded people who care about the climate and work towards a healthier and cleaner environment.

Previous article Action From Home To Protect Our Home! 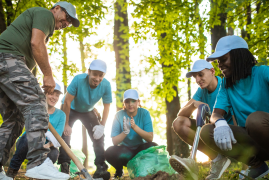 Invest In Planet with Earthr.org